Posted by Recce Rifleman
With the year winding down, and fewer and fewer blog posts from this author, it seemed appropriate to tell the kind readers of this blog about some of the derp The Rifleman has seen this year. There was plenty of it.
Today's entry is a near instant classic.
The Rifleman was in a class. It was a certification class. Teaching the participants to be teachers. One of the exercises was that each of the participants was picked to teach a session. The Rifleman was selected to teach "bench rest shooting." For just under 5 minutes, I described getting into a position, how to take aim, and how to gently squeeze the trigger. The position described resembled this entry from "Box O Truth" - 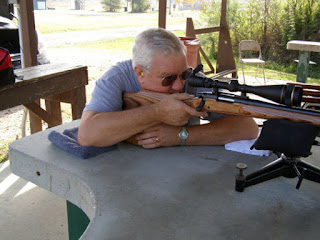 As with all of the sample sessions, critique was offered after the session. The instructor (former Army MP, and NRA Instructor, among other credentials), and a fellow participant (former USMC Scout Sniper) both suggested holding the fore-end, preferably with a hand over the top, to reduce felt recoil. This image displays what they suggested (just imagine the rifle is on a bench, and not held from standing): 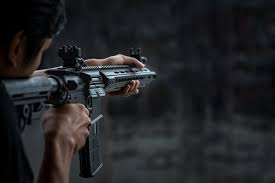 I was confused at first, as I have never heard of this (a later Google search yielded one whole article suggesting it). I thought they meant this variation: 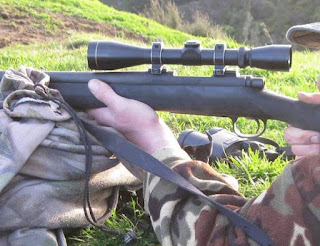 After they demonstrated what they meant, I asked why - and they reiterated recoil management. My immediate question was why not the cross armed method demonstrated, and the instructor said he had seen too many people get scope bite. I offered that the shooter might be better served pushing the shoulder into the rifle, maintaining correct eye relief, and adopting the near-universal cross arm position. 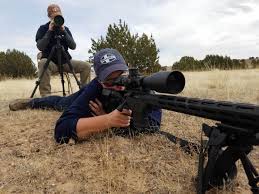 There was much push back by the instructor. At that point, I decided I needed the certificate more than I wanted to show that certified instructor how he was dead wrong. I shut up. I got my certificate. And I out-shot both of them at the range on qualifications day. It wasn't even close.
Oh, and just in case you are wondering, when you Google "USMC Scout Sniper," this article by the Marine Corps Times appears. And the first image is a Marine using cross arm method: 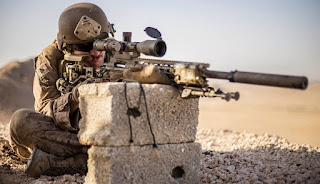 I verified with another Scout Sniper, whose DD214 I have seen, and he had never heard of holding over the barrel from bench or prone. Except when I teach a variation to use with AR15 rifles when resting the mag on the ground, as demonstrated here (9:35 minute-mark) by Aaron Cowan of Sage Dynamics.
So, I am sure these folks will keep teaching what they want. And I will keep teaching what I want. And we will each get the results our teaching methods warrant. My new long range students tend to hover around 2 MOA groups at 500 yards on Day 1. That is more than good enough for what we are doing. And none of them has ever had scope bite using this grip.
at 9:07 PM Labels: Guns
Email ThisBlogThis!Share to TwitterShare to FacebookShare to Pinterest