They Really Don't Get It

From a reader of  this article -
"Aren't you being too harsh on the police?"

Noted firearms instructor Greg Ellifritz had this to say:
This is looking worse and worse.

They let the guy go for up to 90 minutes because they said they didn't have a key to the classroom door that the killer locked.

This is the prime example why I no longer train police agencies or write articles about best practices in police response.  The cops don't care and refuse to learn lessons from past tragedies.

I wrote about cops needing breaching tools in the first month I started my website.  That article (linked in comments) was in 2012.  Since then I have written 18 different articles on my site about the importance of breaching capability for responding cops.

We've known since Columbine (1999) that cops need to make immediate entry to stop the killing.  Yet these cops waited for swat.

20+ years of death and tragedy has taught us nothing because most are too lazy to seek understanding.

The problems these cops faced are not new.  Ample information is freely available to the officers who want to learn how to best handle these incidents.  But cops remain ignorant and their bosses are never held accountable.

You are on your own. 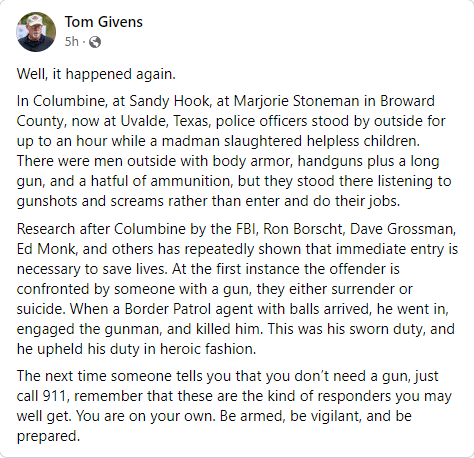 Firearms Instructor Extraordinaire, Tom Givens, had this to say:Well, it happened again.
In Columbine, at Sandy Hook, at Marjorie Stoneman in Broward County, now at Uvalde, Texas, police officers stood by outside for up to an hour while a madman slaughtered helpless children. There were men outside with body armor, handguns plus a long gun, and a hatful of ammunition, but they stood there listening to gunshots and screams rather than enter and do their jobs.

Research after Columbine by the FBI, Ron Borscht, Dave Grossman, Ed Monk, and others has repeatedly shown that immediate entry is necessary to save lives. At the first instance the offender is confronted by someone with a gun, they either surrender or suicide. When a Border Patrol agent with balls arrived, he went in, engaged the gunman, and killed him. This was his sworn duty, and he upheld his duty in heroic fashion.

The next time someone tells you that you don’t need a gun, just call 911, remember that these are the kind of responders you may well get. You are on your own. Be armed, be vigilant, and be prepared.
(Emphasis mine)

My experience -
Exactly ONE police officer ever took martial arts classes from me while an officer.  Another man actually stopped taking the classes once he became an officer!

Exactly TWO active duty law enforcement officers have taken a firearms class from me ever.  One of whom was a file clerk and also an avid sport shooter... definitely an outlier. The other was a theif.

Summary
Nobody is coming to save you.

Police want to do the bare minimum they need to do in order to keep their jobs.  And given how difficult it usually is to fire a cop, that threshold is very low.

The vast majority of law enforcement persons absolutely REFUSE to become professionals in their field.

at 7:41 AM Labels: JBT
Email ThisBlogThis!Share to TwitterShare to FacebookShare to Pinterest